More of the Disassembly

Taking apart an old car is like archeology - but also like reading a mystery novel. For instance, even through this is a car that has been in the family since it was new, we've discovered some surprises. Apparently, before delivery, there was an accident of some kind, as when we removed the driver side front fender, there was sign of some minor body work.

Most of what we are finding are rediscoveries for me - like the scratches on the tailgate which came from our family dogs. I love finding these things. I also enjoy seeing the hands of those who built the car in the way the paint is applied to the floorboards. It's as if they were just put there yesterday.

Where are we on the project as of Nov. 3, 2009?  The engine and transmission are out.  The engine was seized and needed more work than we thought, but the transmission scored high points for being "almost perfect." The rear end remains a BIG mystery - but we will find out its status later. Everything is out of the interior except the door panels, the dash, and the headliner. This includes all the presents left to us by the generations of rodents that called this car home.

The tailgate is off - finally.  The electric window was no longer operational, which put us in the situation of not being able to put the tail gate down.  The technical service manual had instructions for how to drill hols on the inside of the tailgate to access the bolts to let the glass down, but there was the matter of a nearly perfect piece of carpet that ccovered the tail gate - and which could not be removed without letting the tail gate down.(it's pictured below).  I did NOT want to cut up this piece if at all possible.

With some muscle and some luck, we were able to get the window down and removed the tail gate.  Like the rest of the car, it is free of any serious rust - a big break for us. This was an outside car.  It was ungaraged in the Sierra Nevada and the rainy Central Valley for years.  How it ended up without pockets of rust is beyond me...not that I'm complaining.

The starter is rebuilt and ready to go.  The grill has been straightened and repainted. A used AM/FM radio was located and is now working, and will replace the original AM radio when the time comes (picture shows the dash as it is right now).

Wiring is up next.

Anyway, here are some pictures showing the progress as of today, including some interesting things -  the owner identification card in my Dad's name (we have the original documentation on the car), and a can of AMC coolant.
Click on any picture to enlarge. 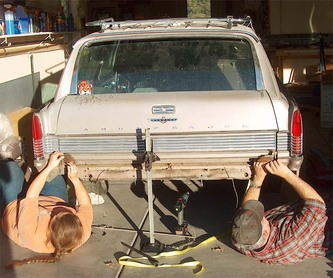 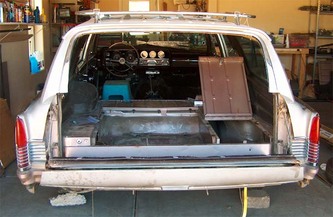 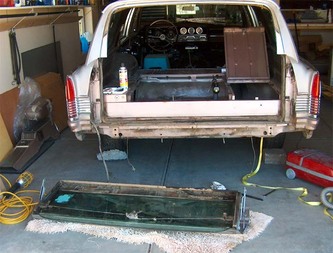 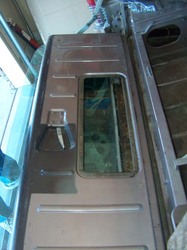 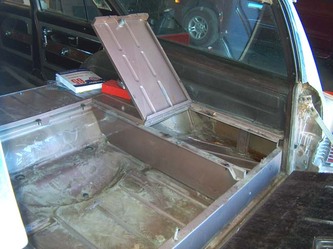 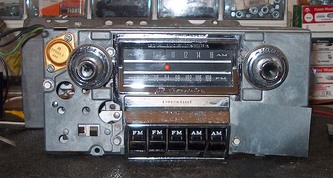 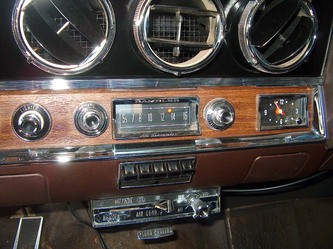 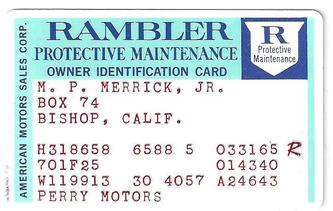 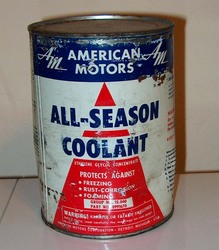